The Malaysian Medical Association (MMA) is gravely concerned as to the possible deleterious health effects from radioactive and other toxic waste residues of the proposed Lynas Rare Earth Refinery Project to be located in Gebeng, Pahang.

We share the public concern that not enough information, attention or due diligence to public safety has been provided, before even the approval of such a huge and contentious project would have been made. Worse, this projected plant touted as the ‘largest’ Rare Earth Refinery in the world (when fully functional) is located so close to human habitation!

It is with much surprise and dismay that most Malaysians hear of this rare earth refinery plant only when it was first disclosed in a New York Times article, a few months ago. Clearly for a controversial project of such a sheer size, there should have been greater importance placed on exhaustive public information sharing and engagement, public safety guarantees, environmental impact studies, and prudent if impregnable long-term waste disclosure and disposal management, versus simply, ‘economic’ gain.

That such a project has been allowed to be developed, to near completion all these many months, in ‘surreptitious’ concealment or without adequate and forthright disclosure, is troubling and unconscionable!

No monetary returns of whatever Foreign Direct Investment and its spinoffs can outweigh possible radiation and/or other health risks, which can wreak harm on our citizens, perhaps for as long as the half-lives of some of the extremely toxic radionuclide waste products—which in some cases might be ‘forever’! Thorium-232 for example has a half-life of some 14 billion years, and gives off alpha particles. This radionuclide residue is recognized as being extremely hazardous for humans and life forms!

Thorium is an acknowledged waste product from the planned Lynas refinery of rare earth ores. Due to the various refining processes, Thorium will be enriched and concentrated to levels, which could reach quantities that are difficult to contain or be safely sequestrated.
Disclosed data from the Lynas projections, estimate that a total of 106 tons of thorium waste would be generated every year. Based on the preliminary Environmental Impact Agency report, Thorium residues would be some 1655 parts per million (ppm), from the total 64,000 tons of Water Leached Purification (WLP) process. This would lead to a sizable radioactivity dose of some 62 Becquerel per gram (q/g). For 106 tons, this would be an enormously humongous quantity of radioactive residual Thorium!
We are therefore extremely concerned that there are no foolproof containment measures for such toxic residue treatment and disposal, despite Lynas’ public proclamation of “Zero Harm” commitment. The myriad refining processes themselves also yield many hazardous products which can unalterably damage the environment, contaminate water catchment areas, agricultural land, and nearby river and seawater food chains.
Where would such hazardous wastes be kept or contained, and how can the public be protected from such a continuing pile-up of more than 100 tons of radioactive Thorium, year on year? What about other toxic wastes, and contaminated water sources?
In a recent report China’s Rare Earth Elements Industry: What Can the West Learn? (March 2010), Cindy Hurst—an analyst from the Institute for the Analysis of Global Security (IAGS)—states that statistics from Baotou, where China’s primary rare earth production occurs, show that “all the rare earth enterprises in the Baotou region produce approximately ten million tons of all varieties of wastewater every year” and most of that waste water is “discharged without being effectively treated, which not only contaminates potable water for daily living, but also contaminates the surrounding water environment and irrigated farmlands.”
Never mind the other mind-boggling wastes and contaminates, radioactive Thorium in itself is worrying enough. Thorium can be inhaled via contaminated dust or swallowed from contaminated food or water. A Human Health Fact Sheet, from the Argonne National Laboratory (August 2005), states that even when very small quantities of Thorium are ingested, the amounts in the human body are not harmless, because Thorium continues to emit harmful and damaging radiation particles.
There is no safe level of residual Thorium, particularly if the isotope is unstable. Even when about 0.02 - 0.05% of ingested Thorium is absorbed into blood stream it is quickly deposited in: Bone (70%, biological half life 22 years), Liver (4%, biological half life 700 days), other organs & tissues (16%, biological half life 700 days), with only about 10% excreted. This phenomenon is known as ‘internal emission’ which then gives rise to continued harmful effects of internal radiation which can lead to possible cancers, leukaemias and other genetic mutations and organ damage.
Deliberations of the Committee Examining Radiation Risks from Internal Emitters (CERRIE), an independent joint UK Department for the Environment, Food and Rural Affairs and the Department of Health (2001-2004) attest to and validate the authentic risks of internal irradiation (Report of the Committee Examining Radiation Risks of Internal Emitters, 2004).

Low-level radiation is certainly not harmless. This committee attributed the persistent excess of leukaemia in young people in Seascale, to the nearby nuclear reprocessing plant in Sellafield, West Cumbria, Britain. CERRIE concluded that “all but one member of the Committee believe that the low level intake of radionuclides leads to some increased risk of adverse health effects as a result of the internal irradiation of organs and tissues.”

As pointed out by Dr CK Chan, that lone minority report argued even more robustly that there is “strong biological and epidemiological evidence that current models of hazard from radioactivity inside the human body underestimate risks by at least 100 and possibly up to 1000 times.”

This excess occurrence also reinforced the anomalous excess in infant leukaemias recorded in several European countries following the Chernobyl meltdown. This Sellafield nuclear reprocessing plant was subsequently shut down due to public pressure!

The US National Academy of Sciences BEIR VII report has also concluded that, no dose of radiation is safe, however small, including background radiation; exposure is cumulative and adds to an individual's risk of developing cancer. Thus, it is artless to ask the public to accept that environmental radiation already exists and thus might be inconsequential to health. Our remit is why should we add on to the potential hazards when this is manmade and almost certainly uncontainable?

Worse still, the lingering memory of the disastrous Mitsubishi Asian Rare Earth mine in Bukit Merah, Perak (1980s), continues to rankle and infuriate many of the hapless victims and their families as well as the residents living in the area. We understand that up to today, cleaning up processes are supposed to be ongoing (is it?), but few if any details have been disclosed as to the current state of this huge human and environmental contamination.

Its forced closure in 1992 did little to assuage the anger and sense of betrayal of the public! No amount of compensation would be sufficient to correct the harm and anguish of those who had suffered. The residual toxic effects among those who do not know better, have not been studied or factored in. One bad experience on such a similar project must necessarily alert the authorities that more must be done in order to prevent another possible recurrence!

Although some information on the industrial process and waste management plans for the Lynas Gebeng rare earths plant have been disclosed, there remains insufficient safeguards and incomplete reassurances that the potential radiation risks from the toxic wastes are negligible or nil. Thus, concerned citizens cannot simply be dismissed as being Luddites with “irrational fears of nonexistent threats”. We repeat that these risks are real and not imagined!
There can be no denying the fact that our Malaysian public is deeply troubled with all things radiation, particularly in the wake of the recent Earthquake-tsunami damaged Fukushima nuclear power plants, even in previously respected if scrupulous Japan. Consider the cynical if understandable view that if even in meticulous ‘zero defect’ Japan things can go wrong, what more to expect from Malaysia where our maintenance culture is arguably and famously suspect!

The Fukushima-Daichi catastrophe continues along its seemingly uncontainable denouement. Despite earlier reassurances, the out of control radiation leaks, rapid and widespread contamination of water sources and crops and the continued cascading meltdown of one nuclear power plant after another, has now shown the devastating severity and reality, the dangers of anything nuclear, when unpredictable if catastrophic events occur. (What more if these radiation wastes are projected to be within residues, which cannot be disposed of or contained as in the planned Lynas rare earth refinery?!)

This shocking truth contrasts starkly with the conversely downplayed if disingenuous systematic cover-ups of the management of the Tokyo Electric Power Company (TEPCO). Conflicted owners and companies are not known to be fair in their judgement and pursuance of truth and public safety, hence it is not surprising that our own Malaysian public seek and deserve more accurate information and reassurance from all authorities involved in approving or rejecting such a project.

Although we welcome the new high-powered expert panel (most if not all are from the IAEA) to review the safety of the Lynas project, there remain many troubling uncertainties. We and the public also share the concern of CAP president SM Mohd Idris, that members of this expert panel may not be truly independent or impartial, because all of them appear to be pro-nuclear power and energy.

There are no independent health, NGO and environmental experts who should have been included to provide balance and input on the most pressing problems with the Lynas project, i.e. its potential health effects and toxicity to residents and the environment, and how to meaningfully contain the inevitable wastes.

Importantly, there must even be consideration to halt the project once and for all, if the company cannot provide all such guarantees. We cannot mortgage the future of our citizens for some few pieces of ‘silver’, no matter how tempting! The means do not justify the ends, when human lives and public safety are at stake.

The government and authorities must not turn a deaf ear to the legitimate concerns of our citizens. We share the staunch social good, precautionary principle that mandates every responsible government and/or international agencies to make every effort to address even the most unlikely worst-case scenarios, and potential ‘black swan’-type of catastrophes.

We must only make informed and thoroughly comprehensive decisions for the public at risk, always predicating and affirming on ultimate human benefit and safety, instead of uncertain material or economic gain.

We urge the government not to rush the decision on this potential minefield of toxic danger for all Malaysians.

Thank you very much for making this public statement. It is indeed hazardous and risky for Malaysia to house such a polluting project. I commend the MMA for its stance and to pioritise public health and safety! 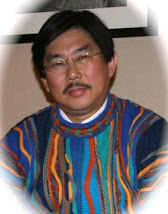 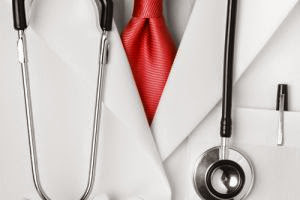 The Opinions and Views in this personal Blog, are mine alone and does not necessarily represent the MPSR, MMA or other organisations, that I am associated with, unless expressly stated...

Interested parties, including the Press, may reproduce or quote materials published with the condition that they are credited to myhealth-matters.blogspot.com.

Comments must be accompanied by names or pseudonyms. Anonymous postings and those blatantly defamatory or containing profanities and obscenities will be rejected. 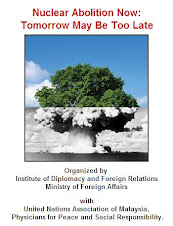